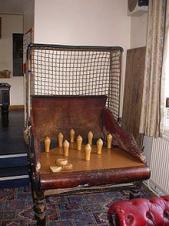 Northamptonshire Table Skittles is a game unique to this area, and played only within a radius of about 25 miles from Tiffield. Nine "pins" are placed in a diamond formation on the table, and three "cheeses" are thrown at them.

If you have never seen this game, come down to The George on a Thursday evening to watch - you don't even have to sit in the games room, as live action from the table is shown on the TV screen in the main bar!

There are two teams that operate from The George in Tiffield, and both play in the Gayton and District League. Matches are played on Thursday evenings between the end of September and the end of April, with one team playing at home and the other playing away. The 'A' Team is captained by Marc Leggett and the secretary is Phil Leggett. The 'B' Team is captained by Steve Jowers and the secretary is Alison Brown.

Details of matches are included in the what's on calendar.